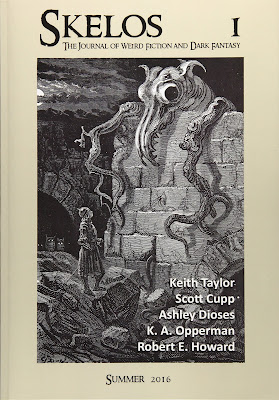 Skelos 1 opens with an editorial entitled "Skull Session." Here Mark Finn, one of the three editors, outlines the journal's mission and provides a definition of "weird fiction." Finn begins by invoking the classic pulp magazine Weird Tales and its "big three": H.P. Lovecraft, Robert E. Howard, and Clark Ashton Smith. From this, it becomes clear that the journal will include not only weird fiction in the Lovecraftian sense, but anything that could have found a place in that famous pulp magazine, including sword and sorcery, occult mysteries, and more. Finn also acknowledges developments in the genre since the heady days of the 1930s, nodding to the so-called "New Weird." The editors intend for Skelos to be situated between these two periods--open to fiction and scholarship of both the old and new weird, but also accepting works that push the genre forwards into the twenty-first century. Perhaps Skelos can be seen as part of a wider trend now encapsulated by such movements as the "New Edge Sword and Sorcery"?

One of the main draws of this issue is a previously unpublished story by sword and sorcery veteran author Keith Taylor. The medieval Irish setting of "The Drowned Dead Shape" will be familiar to those who have read Taylor's Bard series. The story recounts the unfortunate events that overtake a motley crew of reavers after an encounter with a monster. Taylor does a good job of juggling multiple perspectives and keeping the plot moving, despite it sometimes feeling arrested by flashbacks.

Another big draw is previously unpublished material from Robert E. Howard. In "Nameless Tribes: Anthropological World-Building in 'Men of the Shadows'," Jeffrey Shanks presents a fascinating insight into Howard's worldview and what shaped his ideas about anthropology and history. This essay is accompanied by drafts of "Nameless Tribes," an early world-building exercise by Howard. These are interesting because they resemble a prototype of Howard's famous essay "The Hyborian Age." This is a true highlight of the issue and a vital contribution to Howardian scholarship.

Another notable entry in this volume is Jason Ray Carney's "One Less Hand for the Shaping of Things." From the opening, the reader may expect a classic sword and sorcery tale framed by the interplay between intrigue and violence. Instead, "One Less Hand" becomes a rather different sort of weird tale that defies comparison: an intense and intimate exploration of a man's emotional encounter with the supernatural. This story drew me in with a slow-building narrative and lush description reminiscent of Clark Ashton Smith. By the end I was genuinely invested in the protagonist, Ayolo, and his relationships.

With "Grettir and the Draugr," Jeffrey Shanks provides a graphic retelling of the Icelander Grettir's encounter with an undead shepherd. Both narrative and illustrations (drawn by Samuel Dillon) are thrilling, demonstrating the debt sword and sorcery has to the Icelandic sagas. However, it was not clear whether this was a direct translation from Grettir's Saga or a looser adaptation. I would have appreciated some signalling here.

David Hardy's "The Yellow Death" is a story very much in the tradition of Edgar Allen Poe, both in terms of style and subject matter. It felt like it could have been written in the nineteenth century rather than the twenty-first. Yet Hardy finds his own voice in this gripping tale of the protagonist's descent into plague-induced madness. Hardy is a talented author, and I shall be seeking out more of his work.

In "A Sword-Edge Beauty as Keen as Blades: C.L. Moore and the Gender Dynamics of Sword and Sorcery," Nicole Emmelhainz uses Moore's "Black God's Kiss" to offer a riposte to the idea that sword and sorcery is an inherently masculine genre. She argues that the genre instead offers a space for the exploration of feminist ideas through stories that challenge traditional gender roles and dynamics. I agree with this bold claim, but hold the opinion that "Black God's Kiss" might not be the best demonstration of it. Jirel of Joiry certainly subverts traditional female characteristics, of which she displays almost none. Whether the plot of the story subverts traditional gender dynamics remains an open question. Nevertheless, Emmelhainz's central thesis here is more important than the example used to explore it. As the author admits, this essay is only a starting point for a wider exploration of feminist themes in sword and sorcery.  Further exploration of these themes will strengthen the genre and its scholarship.

Each of the entries in the journal is accompanied by at least one illustration, which, along with the cover image by Gustave Doré, serve to fire the reader's imagination. Poems also intersperse the journal, providing occasional breaks from the longer pieces. Finally, the journal closes with some useful reviews of related fiction and non-fiction.

The recurrence of barbarian-like protagonists in several of the stories (e.g., those by Taylor, Shanks, and Sullivan), stories that evoke Lovecraft and Poe (Hannan and Hardy respectively), and an exploration of Robert E. Howard's influences keeps Skelos rooted in the traditions of weird fiction. Meanwhile, contributions like those by Carney and Emmelhainz signal the journal's intention to break out of those traditions. The issue succeeds well in balancing the traditional with the novel. Furthermore, the balance between fiction and non-fiction (70% to 30% according to Finn's editorial) also felt right. While the contributions are, expectedly, a mixed bag, the quality tends towards the higher end, and I look forward to reading the following issues.

About the Reviewer: Ricky Broome is an aspiring historian with a PhD in early medieval history. He lives in the UK with his partner, their daughter, and two feline familiars, Lucifer and Loki. When not reading about things that happened a long time ago, he indulges in weird and fantastical fiction.
About Spiral Tower Reviews: The authors who maintain the pulp genres of sword and sorcery and cosmic horror merit support. Financial support is key but there are other ways the cash-strapped can show support: engaged reading and thoughtful analysis. Literary movements emerge through the interactions of editors, authors, publishers, and amateur literary journalists. Learn more about contributing your review here. We are happy to work with first time reviewers.
Previous Spiral Tower Reviews:
Tanith Lee is the Empress of Dreams, review by George Jacobs
The Razor Sharp Prose of Howard Andrew Jones' For the Killing of Kings, review by Chase A. Folmar
Imagining Primordial Heroes and John R. Fultz's Worlds Beyond Worlds, review by J. Thomas Howard
Technology Meets Magic in Adrian Cole's Dream Lords: Rebellion, review by George Jacobs
The Eye of Sounnu and the North Star of Neo-Pulp, review by J. Thomas Howard
Narrator as Character in Melion Traverse's, "A Song for Sir Ava", review by Chase A. Folmar
The Mythic and the Barbaric in Schuyler Hernstrom's Thune's Vision, review by Luke E. Dodd
at 8/01/2022

Spiral Tower Press has established the Trigon Awards to show appreciation for those who champion the past, present, and future of the pulp genres of science fiction, fantasy, and supernatural horror. Trigon awardees demonstrate artistic, intellectual, and passionate commitment to the values celebrated by the sorcerer's mysterious trigon: chronopolitanism, compassion, and hope.

For the first year, the awardees will be selected by the organizing committee of SpiralCon 1. Future Trigon Awards will be determined by a rotating and anonymous standing committee, "The Trigon Committee," who will nominate and select the awardees with the optional voting and nominating aid of previous awardees. Although there will be no formal nominating process, advice and suggestions will be welcomed by the committee. Nominees will be secret and will not be announced or discussed by the Trigon Committee in public or outside of official internal award-focused discussions.

The award carries no financial remunerations. Awardees will receive a certificate.

The Trigons will be awarded for the first time this Saturday, July 30th, at SpiralCon 1 at Christopher Newport University in Newport News, Virginia.

8:30a-8:50a: Gathering. No registration necessary. Name tag stickers will be available for those who want them.

9:00-9:50a: Opening comments from Dr. Jason Ray Carney, CNU Department of English, followed by presentation on Edgar Rice Burroughs and "Sword and Planet" by Henry Franke, Editor, The Burroughs Bibliophiles

10:00a-10:50a: Lecture. Chris Semtner, Curator of the Poe Museum, "Pandemic and Poe: The Masque of the Red Death in Context"

There is a room with approximately five tables set aside for socializing, gaming, and other uses. They are first come, first serve.

This is our first time doing this so please manage your expectations. Thanks for the support. 😊📚☕️